Who knew that killing deer could be such fun? Certainly not I.

That’s why when I found myself getting rather addicted to the hunting simulator, “theHunter”, I was rather surprised. I’d never played a hunting game before this, for fear of becoming an evil fuzzy-bunny murderer. And after becoming an evil fuzzy-bunny murder, I must say it isn’t as bad as I’d thought it’d be. For one thing, I’m an evil deer murderer.

Don’t get me wrong. I’m not the kind of guy who revels in pain and death. I’ve wooped at my own share of crockets, and I’ve sworn and promised revenge on plenty of Demomen. But it’s never been on the level of slaughtering an innocent animal in the name of sport, even if it is in a game. I’ve always been of the mindset that unless it’s actively trying to kill me, I’ll leave it alone. That’s always been my mindset in Warcraft PvP, and I feel iffy taking an innocent life.

I downloaded the 450MB client and about a week later, after I remembered that I’d downloaded it, installed it and created a character on their website. Standard login, standard password, standard nickname… what’s this? Choose a from a randomised selection of faces and names? Vincente Foxe it is, a beautifully pornstar-esque name, even if my character does look Mexican. 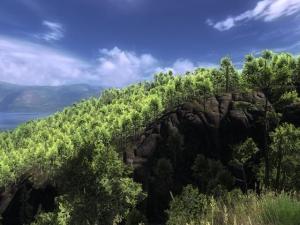 After literally gobsmacking at the graphics and squeeing at the presence of crepuscular rays, I wandered aimlessly around for a while, inspecting the odd leaf, and strolling off into the forest at my leisure. Ten minutes later, bored, I closed the client.

So far, it wasn’t the emotional tour de force that I’d expected from Grand Theft Hunting: Deer edition. Hell, I hadn’t even seen a deer. It was as I closed the game and glanced at the website that I noticed I had a message. It turned out to be the tutorial, and I follow the directions down to the waterside, where I notice two deer drinking from the lake. I go prone to steady my gun, aim my sights carefully over the poor animal, whisper an apology, hold my breath to steady my sights and…

I miss. The deer runs off into the forest. With it go my last vestiges of restraint towards the killing. I’m hooked. There’s something horribly compulsive about tracking down and killing something that actively works against you. There’s a true pride in pitting yourself against an opponent that you must out think and outmanoeuvre your prey. The first time I succeeded in taking down a deer, I yelled “get some!”, like I was in Vietnam or something. It felt like the deer had really made me work for my victory. This was the most fun that I’d had in ages. No FPS had compared to the sheer joy that I gained simply from trekking around forests. It was the constant hope that a deer will be around the next corner that kept me tracking them, and it made up for the long time between spottings when I finally did find one. And then it was “just one more”.

I’ve succumbed. I’ve bought a four month license to hunt the rest of the wildlife on the island, better camoflague, and a much better gun.

But how long will this game last me until I get bored? In the meantime, turkey, coyote, elk and whitetail deer await me!