Team-based shooters have always been something of a no-go area for me. I had played Counter-Strike: Source enough times to know that it wasn’t for me. Apart from the occasional GunGame map, I tend to steer well clear of it. And why? Because I’m a noob. I’m not much of a shooter. I’m competent and I always have been. But I lack the fast-twitch skills and the hair-trigger mouse finger to really rise to the top. Perhaps my easily-distracted nature has gimped me, and all I need is practice, but I’ve never been one for sticking with a game when I’m rubbish at it and not having fun. I’d rather go play a different game and have fun than stick with a game I’m not enjoying. Judge me if you like, but I know what I like.

And that’s where Team Fortress 2 comes in. When it was released, I scoured the review, and the details of the combat enthralled me. The options! The taunts! The characters! Everything pulled me towards this game; it was shiny-central for my short-attention span.

As soon as I had a PC that could run it (my old laptop was dying a slow and painful heat-death), I bought The Orange Box and installed it. Heaven was mine! Team Fortress 2 was as good as I thought it’d be and I loved it! I’d arrived just as the Gold Rush levels were released and those levels were my Mecca. They still are, in fact. With forays into custom maps, I loved everything about it. The maps, the weapons, the community… everything was great. I even dragged large amounts of my clan into it, and they play it to this day. 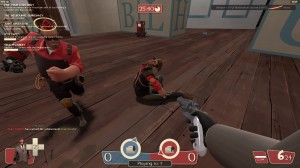 And then I got bored and stopped playing.

This happens with a lot of games, as regular readers will know. Hell, non-regular readers should have figured it out by now. But Valve were on to me. With nano-cameras no larger than the dust particles in The Orange Box, they watched me and millions of other players become slowly bored and start switching off hl2.exe.

What happened next is detailed in the Not-So-Elder Scrolls(TM) as held by Markus Persson:

Gabe Newell did arise and proclaime: ‘THIS SHALT NOT BE!’
The Valve offices and pie shops shook with his wrath, for his was this game, and he foresaw the immenent downfall.
And the great chjinn bellowed and smashed and there was much wailing and gnashing of teeth.
Until the Great Prophet Walker did arrive, and with a calm voice did he quiet the great beast.
And ‘lo, was Hatdora’s Box opened, and unlocks were unleashed upon an unsuspecting world.

Valve released the unlock system and people came flooding back. Or maybe they’d been there all the time, and it was just me who arrived like so many Noahs. My playtime with the Medic was tiny, but I came back anyway. I joined the mad-Medic rush that consumed servers like a healing wind of needles. Whilst I got few of the unlocks, perhaps one – Valve had intrigued me, and I waited for the next class update with bated breath, knowing that it was sure to be a class that I played.

And boy, they didn’t disappoint. The Pyro Update rocked my world and set it on fire. Much like a girl you might pick up in a seedy bar, the Backburner granted guaranteed crits from behind and left afterburn. Only in TF2 would that be a good thing.

Drops came much later to the game than unlocks. Originally, the only way to get new items was to earn them through the achievement system. Later, that changed when the drop system was implemented. Now there was a way to get items without earning them! You simply played long enough for stuff to drop. So I played. And played. And played. And fuck all dropped. Valve had made it pretty damn hard to get items. Hats were even harder to get. The chances of me ever getting a hat from a drop weren’t great.

And thankfully, they changed that. Now the drops come pretty often, and although hats aren’t any quicker than they used to be, they’re only cosmetic items anyway, so who gives a shit? It’s the shiny new weapons that I care about!

And wow, aren’t they fantastic. Even now, Valve are adding more and more new items. And despite the age of the game it’s still fun to get a new weapon to play with. TF2 isn’t like an MMO, where a new weapon generally means an upgrade to your existing skills. In TF2 it’s so much more; it’s an addition of skills and a change in playstyle. When the Engineer update released, I ran around with a Gunslinger, punching people in the mouth. It’s not how the Engineer should be played, but who cares? I could punch people with a robo-fist! This new item made melee a fun and viable alternative to playing the Engineer in the normal way. Some changes are obviously more blatant than others, such as the Demoknight becoming the unofficial tenth class, but I’m sure that Valve were looking at me personally with their Valvebots when they designed the Enforcer. Or was that community-designed? Either way, it fitted beautifully with my Spy playstyle of ‘run-and-gun IN THE FACE’. And whilst it might mean that creepy teenagers designing TF2 weapons are spying on me, I’m fine with that, because it fitted into my niche (ooh err). Each and every new weapon has opened new options in playing TF2, and exploring the new niches of each class is a blast. Literally, in some cases.

More importantly for me, the drop system has kept Team Fortress 2 alive. Valve have done much the same as major MMOs in offering new content to keep the audiences, and best of all, Valve did it all for free. I’ve never had to pay anything past the box price for The Orange Box.

I love you, Valve. And I love you, Team Fortress 2. Long live you both.

Much love to Gabe Newell and Robin Walker, despite my ribbing. And the same to Bethesda, despite their suing of Notch aka Mr. Minecraft. Team Fortress 2 is already in your Steam list since it went free-to-play, so go play it!