The shiny thing in this case is CCP Games’ EVE Online, a massively multiplayer role-playing game set in outer space. My problem is that I’ve played EVE before, on many occasions. I’ve also given it up and gotten bored of it very quickly on those occasions.

The main problem is the people I know who play it. I’ll hear people playing it a lot of the time, and that tempts me back in again. The problem is, I know that as soon as I get back into the game I’ll be stuck doing the same thing as I’ve done before. And that soon gets boring for me. I lose enthusiasm, and soon re-quit the game. Again.

EVE Online, for those not acquainted, gives you a large galaxy, a small ship and kicks you out the door, expecting you to fend for yourself. There’s a fairly lengthy and in-depth tutorial, but in my experience, very few people bother to sit through it, preferring to jump into space screaming “FIRIN’ MAH LAZOR”. I can understand why those people left the game. However, I wasn’t one of those people. I sat through the tutorial; warped where it told me to, shot what it told me to, and picked up what it told me to. I knew as much as starting players would be expected to know, and I left the tutorial with optimism and a bunch of ideas for my personal expansion into space. 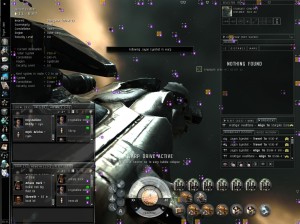 They never really materialised. I spent a few weeks mining high-security space (security rating of 0.6 and above) asteroid belts before an ill-advised trek into low-security space (0.5 to 0.1) caused the destruction of the Destroyer that I had scrimped and saved up all my little Interstellar Kredits for. And that kinda killed the game for me. Everything that I’d spent weeks on was destroyed in an instant by a player who had a whimsical decision to roam into the same belt as us. I understand that a lot of EVE players actually thrive on the risk involved in going into low-sec space, but I personally have never liked the crushing feeling of having everything taken away from you by one moment of bad judgement. To pile on top of that, it’s horribly hard to make good money in EVE without doing the NPC-run missions, and even those are remarkably sparse in money until you reach a decent level.

In addition to this, EVE has a notoriously hard learning curve. It takes months for you to be able to fly anything resembling decent, and it’ll then take another few months to be able to fit the guns to use on that ship. And that’s fine, to people who don’t mind making the commitment.

So why, despite all of my personal criticism, do I still hold a lusting for it? Well, a few friends of mine stayed on in the game after I foolishly introduced them to it, and they kept tempting me back into it time and time again. The first few times weren’t as bad as the first, as my friends had gained more than a little experience in the harsh PvP-orientated world of 0.0 security space (the riskiest area in space, but the most profitable), and I had picked up stuff from listening to them in Ventrilo. So I joined them down in 0.0, where we set up a base and began skirmishing with other pirates. I bought my ISK by selling timecodes to other players (a legitimate way of “selling gold”, basically), and before long I was in a Cruiser, flying around with the rest of them, taking part in fights. I was usually the first to die, being in a comparatively fragile ship, but my economy was stable, and I enjoyed myself immensely.

However, it was the parts in between the fighting that I couldn’t stick. I found that I was doing nothing else in the game except logging on to change a training skill, and take part in scheduled fleets, and that was about it. I quickly lost interest again. 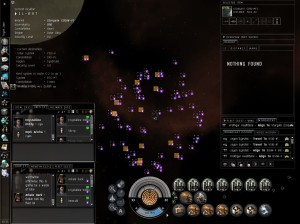 So, from all of that, you might imagine that I’d lost all interest in EVE, right? Well, obviously not, since the first few lines indicate otherwise. But just pretend.

Really, what drew me in most about EVE after the first few experiences was the politics. Because 0.0 security space is a fully player-driven and owned area, unlike any other MMO, and because EVE utilises a single server for their entire player base, also unlike any other MMO, the player politics and battles are staggering in scale. It is the constant battles that go on between the player-run Alliances and Corporations for control of the territory that keeps me loving EVE’s world. I love to listen to the EVE players, simply because it gives me a window onto the game which I love, yet cannot play. My lack of longevity with this game frustrates me, and that’s why I attempt to play it every couple of months. I always fail, but that doesn’t stop me from trying again in another couple of months.

And now, I’m at that point where I crave EVE. Yet I know I won’t play it properly and I’ll lose interest. Such is the curse of having such a low attention span. Perhaps this time will be different. Perhaps.